GRT is one altcoin that has rallied harder since BTC rebounded to above $46,000

The Graph price (GRT) has hit a new weekly high at $0.95. Bulls are currently trying to break higher, as Bitcoin’s and Ethereum’s surges have a favorable effect on the altcoin markets.

The indexing protocol token’s price has risen by over 36% in the last week, and more than 57% in two weeks. GRT currently trades at $0.93

Is it possible for The Graph to go up and exceed $1.00 within the next two trading days? Let’s take a look at the GRT prices from a technical standpoint.

GRT/USD lost some of its early morning gains due to profit-taking limits upside moves. However, buyers seem to have the upper hand.

The 4-hour chart shows that the moving average curves are upwardly sloping, which suggests further strength for a bullish continuation.

The Awesome Oscillator confirms bulls have momentum as the bullish histogram keeps increasing within the bullish area.  If the price is above the $0.95 threshold, it could reach $1.00 where bulls will be at the May level. 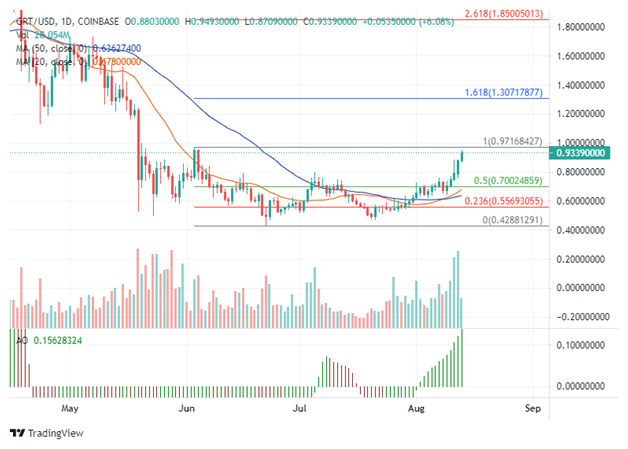 Daily charts also show four consecutive higher closes with the formation a three-outside up candle formation. The market was somewhat indecisive this week but has since turned around with positive moves and a golden crossing formation.

According to the Awesome Oscillator, the bulls are clearly in the ascendency. Bulls could target the $1.85 2.618 Fib Retracement Level ($1.85) if the bulls break above the $1.31 level, and maintain upside momentum for the next few days. Where to buy LUNC coin